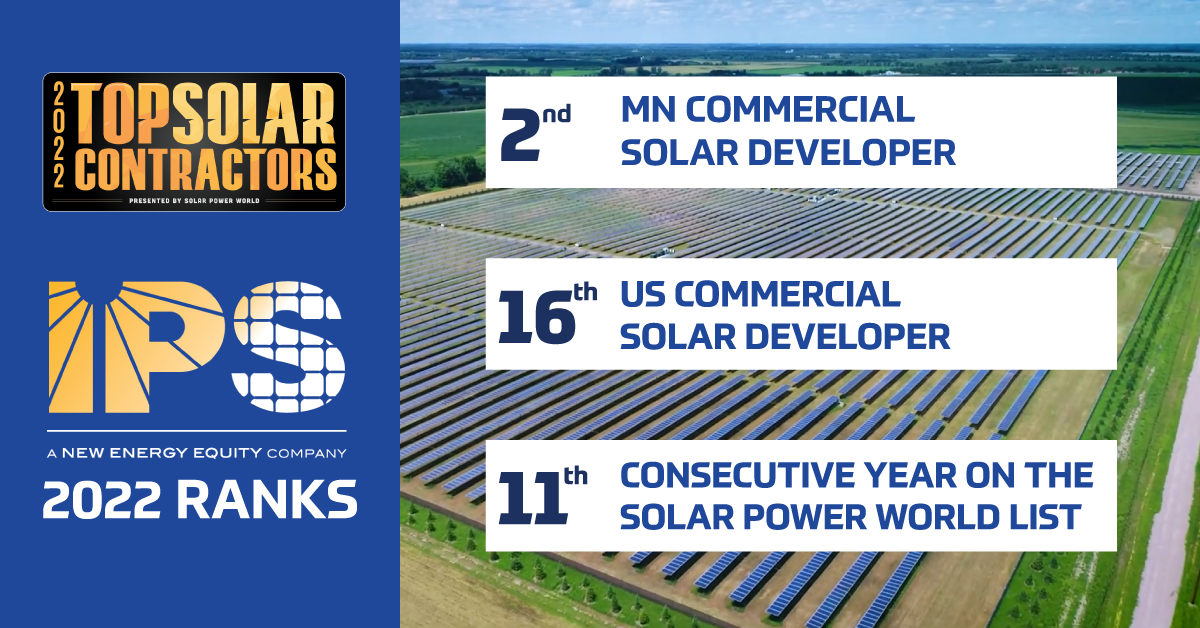 [ROSEVILLE, MN, 7/26/22] — Despite concerns over supply chain interruptions and tariff investigations, the U.S. solar industry saw record solar and energy storage demand in 2021. Impact Power Solutions can attest to this, having one of its busiest years yet. Solar Power World has recognized the company’s installation success by ranking IPS at No. 103 overall on the 2022 Top Solar Contractors list. IPS has been featured as a Top Solar Contractor every year since the list’s inception. Along with their 103rd overall ranking, IPS was ranked 16th nationally among solar developers and 2nd among Minnesota developers.

The Top Solar Contractors list is developed each year by industry magazine Solar Power World to honor the work of solar installers in the United States. Solar firms in the utility, commercial and residential markets are ranked by number of kilowatts installed in the previous year. Companies are grouped and listed by specific services, markets and states.

“The utility-scale solar market, of course, puts up huge installation numbers each year, but the majority of workers in the industry are constructing projects in the commercial and residential markets, which continue to break records,” said Kelly Pickerel, editor in chief of Solar Power World. “Over 85% of the companies on the 2022 Top Solar Contractors List primarily work in the residential and commercial sectors, and they all reported closing out the last year in a positive light.”

According to data released by energy research firm Wood Mackenzie — before recent federal decisions to prevent additional tariffs on imported solar panels — the United States is expected to install 11 GW less than originally predicted in 2022, due to continued supply chain constraints, price increases and interconnection challenges. Still, a survey of the 2022 Top Solar Contractors class found that 59% predicted their business would increase in the next year, with only 9% assuming business would decrease.

IPS employs 32 workers who helped install over 22 Megawatts of solar power in 2021. Since its founding in 1991, the company has installed over 170 Megawatts of solar. The company remains dedicated to positively impacting people, power and the planet with solar energy.

Solar Power World is the leading online and print resource for news and information regarding solar installation, development and technology. Since 2011, SPW has helped U.S. solar contractors — including installers, developers and EPCs in all markets — grow their businesses and do their jobs better.