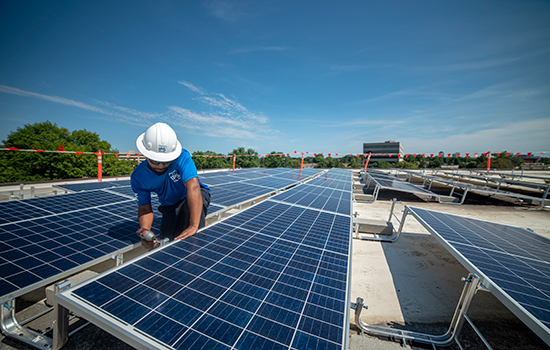 Clean energy can and should be the focal point of a post-pandemic recovery. Wind, solar, electrification and energy efficiency projects create jobs, bolster rural and urban economies, and can transform the social inequities made transparent by this virus. Currently, about a quarter of electricity production in Minnesota is renewable, a number that has been steadily rising over the last decade.

A series of studies released this month by E2 and BW Research showed that clean energy jobs have grown 10.2% year over year since 2015; one of the fastest growing sectors in the U.S. But like the rest of the economy, clean energy needs a stimulus. According to the same research the sector lost more than 106,000 jobs in March – erasing all gains made in 2019.

Policymakers should look to the American Recovery and Reinvestment Act of 2009 as a blueprint. The ARRA provided grants in lieu of tax credits so that businesses could invest even if their tax liabilities were low or nonexistent. In 2010 our company, IPS Solar, helped a local hardware store and a nursery in Lester Prairie install projects with the help of these grants, which lowered their bills and boosted our business. According to the White House Council of Economic Advisors, the ARRA helped support 900,000 clean energy jobs from 2009 to 2015. And the initial boost worked. As the solar industry ramped up, costs declined significantly; compared to 2010, solar panels today are about 89% more cost effective and efficiency has improved considerably.

Clean energy helps rural communities by providing new tax revenue for local governments. County in southern Minnesota has received $19 million in wind taxes since 2004, according to the Minnesota Department of Revenue. In 2019, wind lowered the county’s tax levy by nearly 3 percent. For the Red Wing School District, a 2016 community solar project developed and constructed by IPS is projected to save local taxpayers over $6 million.

State governments looking to address critical economic, environmental, and social issues should absolutely consider green power. In Minnesota, the Legislature controls funding in the Renewable Development Account – from fees on Xcel’s storage of nuclear waste, which has now accumulated a total of roughly $84 million since 2014. Now is the time to spend these unencumbered dollars as a clean energy stimulus.

Initiatives like Solar on Schools would provide important 21st-century learning opportunities for students and help districts save money. Energy savings from the program would return $2 to local property taxpayers for every dollar spent out of the account, when leveraged with private financing. Funding can also go toward continuing Xcel’s successful Solar Rewards program, which has specific solar incentives for small-scale solar and solar for affordable housing. These incentives in turn help businesses thrive, growing their workforces and strengthening local economies.

Finally, this disaster has highlighted abysmal disparities between wealthy and poor communities – especially for communities of color. Blacks and Hispanics are much more likely to live downstream from coal plants or near hazardous waste sites. In 2015 the death rate from asthma for black children was 10 times higher than the rate for white children. Exposure to more air pollution is one of the primary factors.

A study from Harvard University, updated on April 5, confirmed a direct correlation between long-term exposure to air pollution and a higher risk of death from coronavirus. Those suffering from respiratory illness are at a much higher risk of death. For areas in which we have information, blacks are 2.1 times as likely to die from this disease, according to data compiled by the Associated Press. Recovery dollars should go toward reducing the inequities that contribute to this overrepresentation. Strategies such as lowering vehicle emissions and replacing coal plants with clean energy must be examined.

Now is not the time to think small — all of these issues are intertwined. As tragic and disruptive as this virus is to so many across Minnesota and the country, the future complexities and price tag from the climate crisis will dwarf this pandemic. Our recovery strategy needs to be bold, and it needs to be green.