The Solar Investment Tax Credit (ITC) is one of the most popular and successful federal policy mechanisms ever enacted to support renewable energy in the US. In the 15 years since its enactment, there has been 59% compound annual solar growth nationwide. With the step-down of the tax credit beginning at the end of 2022, potential solar customers have limited time left to take full advantage of its benefits.

The ITC is a tax credit that can be claimed on federal corporate income taxes for 26 percent of the cost of a solar photovoltaic (PV) system that is placed in service during that year. The tax credit is claimed against the tax liability of residential and commercial investors in solar energy property. This credit is used when homeowners purchase solar systems outright and have them installed on their homes or when businesses install, develop and/or finance solar projects.

The ITC was originally established by the Energy Policy Act of 2005 and was set to expire at the end of 2007. Due to the success of the program Congress has extended its expiration date multiple times, most recently in 2020. That extension set up the tax credit to step down to 22 percent for all projects that begin construction in 2023. In 2024 the residential credit will drop to zero while the commercial and utility credit will drop to a permanent 10 percent. 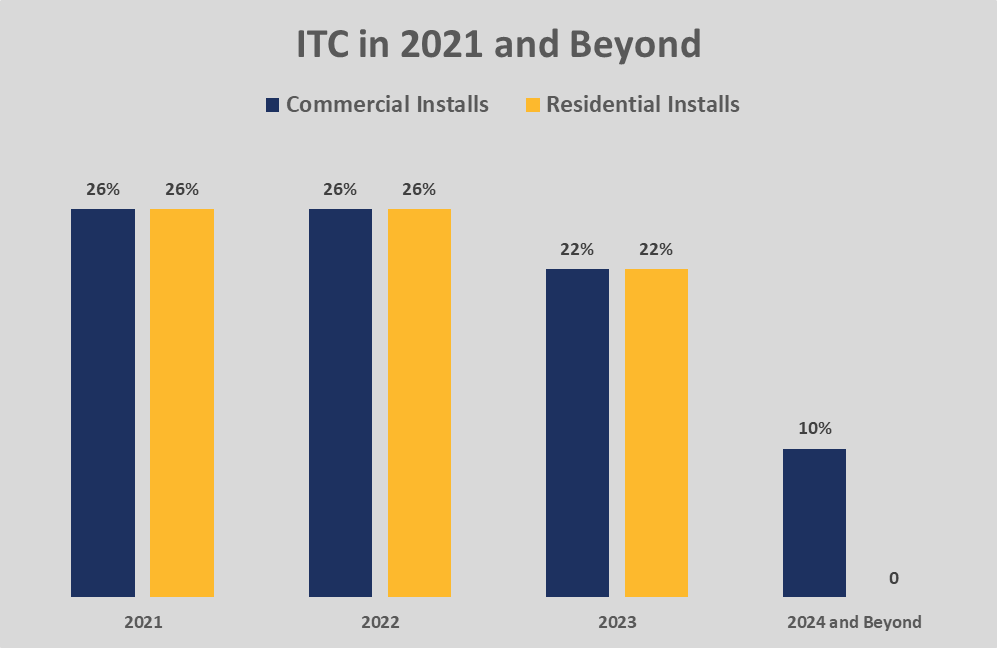 The upcoming stepdown will substantially increase your solar project’s total cost. Let’s run the numbers with a 100 kW array on a multi-home residential unit, retail space, or office building, which costs approximately $200,000.

Investment decisions like this aren’t made overnight. Fortunately, there is still time to save in 2021 and 2022 with safe harboring.

*Approximate ITC savings based on typical industry and system size.

What is Safe Harboring?

Safe harboring is a legal (and sensible) method created by the IRS to freeze the current Solar ITC rate of 26% for up to 48 months. By beginning construction with continuous work, or by investing 5% of the project cost before the December 31st deadline, the IRS will essentially grandfather you into this year’s credit rate, even if your project is not complete.

Be aware that safe harboring involves a much greater level of detail than what we covered here. Renewable Energy World’s article on the subject is a fantastic resource, and we’re always happy to get in touch and share our expertise when it comes to solar projects.

As an IPS client, we take care of all applications and permits necessary to complete your project. Our knowledge of state, federal, and utility incentive programs allows us to maximize savings for our customers and source more funding than any other developer. Contact us to get your questions answered and get started today.