Context: What is Community Solar?

In 2013, lawmakers enacted legislation that allowed for the Community Solar Gardens (CSGs) in Xcel territory. The idea was that many organizations and residents around the state would like to adopt solar, but for a variety of reason were unable or unwilling to install panels on their properties. CSGs allow those ratepayers to participate in off-site solar arrays, mostly developed and operated by companies other than Xcel.

This caused some heartache as developers struggled to launch the program (it took 3.5 years for Xcel to turn on the first large-scale systems), and a few developers were found to be in violation of certain ethics related to the program. But now the program is in full-stride. Xcel expects to surpass 300 megawatts of capacity by the end of 2017 (enough to power ~35,000 homes), making it the largest program of its kind in the country.

Context: What is Renewable Connect?

Renewable Connect is a response to consumer preferences and, in many ways, is a competing offer to Community Solar. Xcel will ‘connect’ customers with various renewable projects around the state and offer to share in the benefits created.

Similar to community solar, the model involves purchasing kilowatt hour credits over time. In this case, consumers can buy blocks of 100 kilowatts each month, essentially paying for the renewable energy credits (RECs) and potential long-term savings. These program and RECs in general come at a premium, and unlike Community Solar there are no immediate savings.  Participants do have several contract term options, as outlined below.

Renewable Connect program customers can participate month-to-month, in a 5-year commitment, or 10-year commitment. These options are a clear advantage for many customers when compared to Community Solar, where subscribers are often locked into a contract for 25 years.

Many Community Solar subscription models offer flexible termination policies, which will become much more prevalent moving into 2018 with the advent of Value of Solar rates.

Most current Community Solar contracts, however, can require drop outs to pay all future 25-year contract cashflows if a substitute cannot be found.  Renewable Connect currently allows participants more flexibility. This round goes to RENEWABLE CONNECT with a slight advantage.

Renewable Connect allows participants to pay for blocks of energy in 100 kilowatt-hour chunks, in return they earn a Fuel Cost Credit on their utility bills and rights to the RECs. Currently, blocks are more expensive than the corresponding credits, making this a pay-in program.

As illustrated above, under the 10-year option there’s still a 7.2% premium over the current credit, added to that the 5 and 10-year options have inflation factors of 1.1% annually or more (see below):

By contrast, the vast majority of CSG offers provide immediate discounts on electricity. These opportunities can save participants nearly $1 per kilowatt hour over 25-years, which for many large consumers equals millions of dollars. Savings estimates for CSGs are predicated on rates increasing, of course. According to Xcel, rates have increased by roughly 3.5% over the past 14 years: 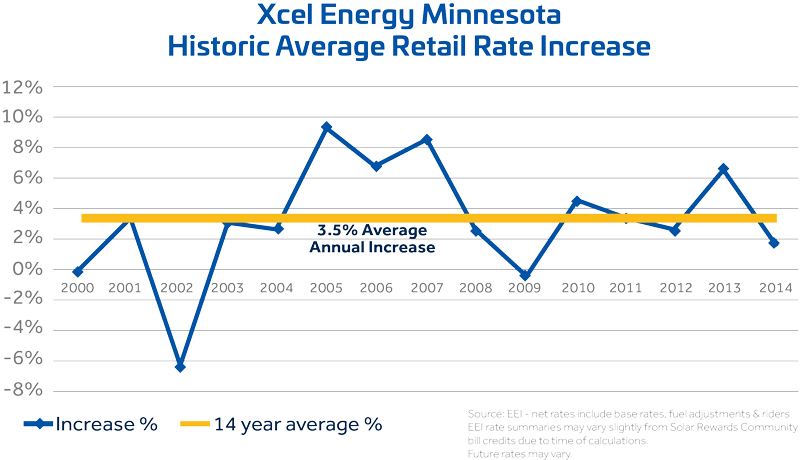 If history is any indication rates will continue to rise over the next 25 years. Xcel’s recent Integrated Resource Plan calls for transitioning their Sherco coal plants (~40% of the current electricity mix) to natural gas and additional capital investments, all of which will need to be paid through new rate cases. It’s easy to see similar inflation numbers through the next 14+ years.

It’s clear this round goes to COMMUNITY SOLAR.

In 100% of CSG projects to date the REC’s have been sold to Xcel for $.02 to $.03 per kilowatt hour. The market for solar REC’s in Minnesota is non-existent at this point so developers have little incentives to do anything else.

The secret for CSG participants is that if REC’s are truly important, they can be purchased from third-party outlets. This arrangement might seem strange but it could ultimately be effective. Consider that you can currently purchase REC’s from independent sources for less than a penny per kilowatt hour. It’s conceivable that a CSG subscriber could save money from day 1 by contractually selling their solar REC’s to Xcel at $.02, turn around to buy RECs from a hydro project in the Northwest at $.01, all while claiming that their electricity is renewable.

The latter example is a stretch, RENEWABLE CONNECT wins the battle here.

Xcel is allowed to sell Renewable Connect contracts to anyone in their service territory. This means their North Star 100 megawatt project near North Branch could service a program participant a hundred miles away in Mankato.  Xcel has gigawatts of wind and solar in their portfolio from around the state.  The idea that they would sell out of Renewable Connect is not probable.

Community Solar projects on the other hand have several limitations. Subscribers must be located in the same or an adjacent county as their CSG project. A CSG in Lyon county for instance cannot sell power to a resident in Minneapolis, which is a major disadvantage. Developers are also limited by the amount of solar a geographic area can handle. Most Xcel substations in the 7-county metro area are tapped out. These factors have limited the current program to roughly 400 megawatts of projects in construction or in service as of mid-2017.

ROUND 5: Clean Energy Economy and Other Intangibles

If you’re a believer in the free market and allowing competition to drive innovation then CSG’s hold an advantage. Not only does the CSG program create more better paying jobs locally, but it’s also created interesting and value-driven models.

According to Clean Energy Economy Minnesota, the clean energy sector employs more than 54,000 people with high paying wages averaging $71,000 a year, which is 21% higher than the state average. Nationally, roughly 374,000 people were employed in solar energy, based on a recent study by the US Department of Energy, while coal, gas and oil power generation combined had a workforce of slightly more than 187,000. It’s clear that more green energy jobs, at higher wages, benefits the local economy.

Consider that only a fraction of roofs are suitable for solar, and that rooftop projects leave those that lease or rent in the dust. Also consider that many low or moderate income residents can’t access the typical home equity loan or other debt to finance a solar installation.

COMMUNITY SOLAR allows for financial models that give participants modest but desirable savings while supporting local jobs, winning the final round.

Both programs have their advantages. If you were to go solely by round then Renewable Connect wins 3 to 2. But, if you weight the rounds on technical points then COMMUNITY SOLAR should come out on top.

Not a knockout so much as a technical win on split decision. CSG economics are extremely attractive compared to Renewable Connect and its community impact will reverberate for years to come. Ultimately the final decision will be made by thousands of participants picking a solution that works best for them.