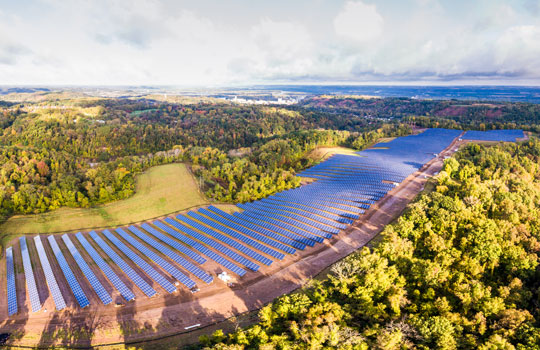 One of the Country’s Largest Community Solar Projects Goes Live in Red Wing
In the rolling landscapes of Goodhue County, you’ll find an emergence of solar panels, a lot of solar panels. The county is set to install over one hundred thousand solar panels over the next few years, mostly due to Xcel Energy’s new Community Solar Garden program. The first of these projects launched in December 2016 on a property adjacent to Red Wing High School.

Community Solar is a program that allows organizations and individuals to “subscribe” to a local solar electric project, located somewhere in their community, not on their roof. “Rates for community solar are often slightly less than current grid rates, and they offer a predictable forecast of costs into the future,” said Eric Pasi, Business Development Director at IPS Solar.

The project will produce enough equivalent energy to power roughly 1,000 average Minnesotan homes. Red Wing School District will enjoy more than $1,000,000 in land lease revenue, coupled with significant energy savings. There are several other marquee subscribers including the City of Red Wing and Trinity School in Dakota County.